Black roses for me

The pleasure and the pain by Marianne Peyronnet 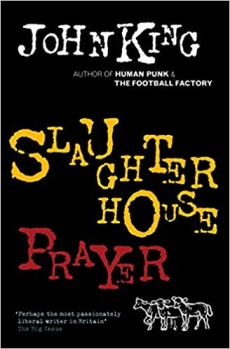 John King has been a vegetarian/vegan since the beginning of the 80’s. He decided not to eat meat long before the current interest of the food industry in this trend. The choice was not, for him, a healthier way to eat but was the result of a deep awareness. To be a vegan means living an ethical life, based on a moral code. On a subject he cares so much about, a project he has been thinking about for ten years, he could not fail. And he has succeeded in writing a monumental work of art. Slaughterhouse Prayer is much more than a brilliant advocacy of veganism. It is not a militant book, in the dogmatic sense of the word. John King is far too clever just to make a final judgement on his fellow men. He is not a know-it-all. He does not try to guilt trip his reader, which would be counterproductive. He does not preach. Slaughterhouse Prayer is not (only) for convinced ones, it talks to everybody. King lets people make their own way, do their soul-searching. And it really hurts. He moves you through fiction, in a sensitive, dreadful novel you will need time to process. You are going to be sincerely upset, profoundly messed up, totally overwhelmed.

The novel tells the story of the main character, Michael Tanner, at three different stages of his existence, in a non linear narrative, made of flashbacks and memories mixed with moments of Michael’s present life, as he is now a mature man. So, three Michaels relay the story, and the spot is tense until the end. Little boy Michael, during a visit at his grand-father’s in the country, understands that animals are killed to be eaten, that sausages are made of dead flesh. And they are not only killed. They are humiliated, insulted, raped, tortured. And nobody cares because they are only animals and have no consciousness, feel no pain, don’t think, have no emotions or memories. As a young man, Michael becomes a radical animal rights activist and questions the justification of violence towards men in order to protect the non-human animals. Later, Michael, calmed down but still not eased, splits up with his world. Will he find peace at last?

To make you feel, that’s John King’s whole talent. First, he enables his reader to understand the permanent aggression you suffer when you are a vegan in a meat-eater environment. The ads, the smells, the leather, everything reminds you the horrors the others refuse to see. And these horrors, King describes them in unbearable passages where animals, a pig, a lamb, a bull become Peter, Mary or John. They tell what they endure; they share their fears and pains. These scenes are terrifying because King translates their thoughts simply, from their point of view. He demonstrates there all his writing skill, as he examines by the way our use of language. When we call a man a smelly pig or a woman a dirty cow, we show our contempt towards beings we don’t only kill but also humiliate.

I am not a vegan, even not a vegetarian. I am one of those who look away. I am one of these hypocrites who put up with this awful lie. So, Yes John, I feel like shit. But thank you for not judging me as a person, for having allowed me to read Slaughterhouse Prayer without excluding me, for giving me a chance to become better. Thank you for this sentence: « but these were his brothers and sisters and he needed to believe that his species was weak rather than evil. They were big babies, overgrown kids building snowmen and adding carrot noses. He needed to belong. He didn’t want to be alone. » Thank you for your love of humankind, after all, for your sweet pages on its gardens, pubs, music and books.

The future is unwritten, but it will be vegan one day, for sure.